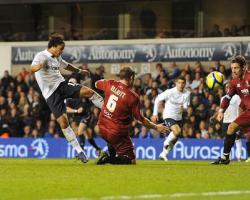 Cheltenham 1-1 Dag & Red: Match Report - view commentary, squad, and statistics of the game as it happened.Hanks rescues Robins a point Joe Hanks rescued a point for Cheltenham in a 1-1 draw with Dagenham.Hanks' effort cancelled out Jamie Cureton's opener for the Daggers

Veteran Cureton fired in his fourth goal of the season in the 58th minute to haunt his previous club.But substitute Hanks followed up after Jordan Wynter's shot cannoned back off the crossbar to end a three-match goal drought for the Robins with three minutes of the game remaining.Cheltenham made the brighter start, with John Marquis lifting a delicate effort over the bar after Matt Richards' pass.Marquis was denied by Mark Cousins after a cross from Paul Black in the eighth minute and Cousins did well to keep out another Marquis effort in the 18th minute after Craig Braham-Barrett's centre.Dagenham threatened for the first time in the 42nd minute when Ashley Chambers intercepted a pass from Marquis and burst into the box, but Trevor Carson made an excellent save.However, Carson could do nothing to deny Cureton who skipped away from Matt Taylor to reach Ashley Hemmings' ball and finish in style.Substitute Zack Kotwica smashed a shot against the bar for Cheltenham in the 77th minute after Wynter's cross, before Hanks ensured honours finished even