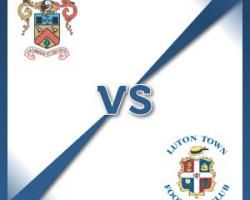 Cheltenham V Luton - view commentary, squad, and statistics of the game live.Robins wary of rushing TaylorCheltenham will ease captain Matt Taylor back into action when they welcome promotion-chasing Luton to Whaddon Road.The 32-year-old returned to the starting line-up against Morecambe last Friday with boss Paul Buckle eager to avoid a possible recurrence of his hamstring problem.Matt Richards is back into contention after being omitted from the matchday squad while Jake Gray could make his first start since joining on-loan from Crystal Palace.One player who will definitely not be involved is defender Paul Black, who left the club earlier this week after expressing a desire to move to America.Alex Lawless and Luke Guttridge could return to the Luton squad.The midfielders have both missed long periods of the campaign so far, with foot injuries restricting the pair to just 13 starts in all competitions between them

However, there is a chance both players could be on the bench on Saturday."Lawless and Guttridge will both be travelling with us but whether or not they'll be included I don't know," said Hatters boss John Still at his pre-match press conference on Thursday afternoon

"There's certainly a chance (they could be on the bench), absolutely

They've trained this week but let's see how they are (on Friday)."Pelly Ruddock will resume full training next week as he continues to ease his way back from a hamstring problem, but Luke Rooney requires a hernia operation and he is set for an extended spell on the sidelines